Allegedly, the Z-Subseries was meant to be a trilogy, similar to how the original incarnation of the Alpha series was meant to only cover three games, before Alpha Gaiden came along to bridge the gap between Alpha and Alpha 2. Here, Z2 was large enough to be split into two separate PSP games released roughly a year apart. How much of this is the writing team needing extra time to scribe their fanfiction, the programming team working around UMD limitations or Bamco wanting to screw with their fans is anyone's guess.

*: As with the previous game, the Macross Frontier plot follows the TV series moreso than the two movies, but Alto's VF-29 Durandal is one of the secret units in this game, which was exclusive to the movie.

Z2.2 opens on a short set of prologue stages, which establish the events that occur after the end of Z2.

Z2.2 picks up a year later, the world has settled into an uneasy peace under the newly founded Earth Federation, although with the fall of the Imperium (Events of Z2), Dimensional Beast attacks are getting worse, and with the A-LAWS busy quashing dissent using come very questionable tactics, the people have turned to private companies for protection.

The game begins in Northern India, with Esther Elhaus taking control of the Brasta-Es to do what she was hired to do: kick *** 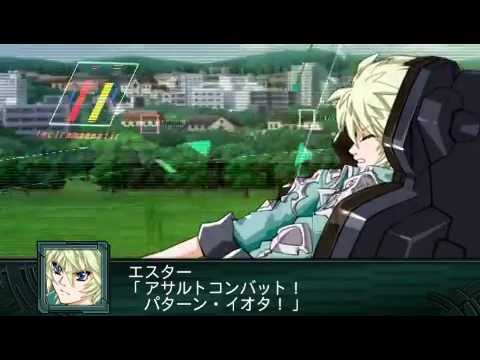 Esther was established as a character during the events of Z2. She is the sole survivor of a Dimensional Beast attack in her Texan hometown and named the beast in question "Moby Dick". Unable to pursue her one-woman quest for bloody vengeance due to injuries (and inability to pilot a mech at the time), she delegates this task to Crowe, who was the one who rescued her in the first place. During the events of Z2, Crowe gets the owner of the Scot Labs to take Esther on as a test pilot, and she's spent the year gap honing her skills as a pilot.

I've currently played up to Scenario 15 ('Man As Before'), taking the Code Geass/Gundam 00 route split when offered at the end of Scenario 3. In this branch, Esther follows Kallen back to Area 11 (Occupied Japan), and finds that most of the people declared MIA or KIA over the last year are, surprise surprise, alive and well. Heero is still lacking a Gundam, Setsuna is still slumming it in the horribly mangled Exia and Lelouch appears to have forgotten everything, expressing considerable surprise when a terrorist (Kallen) breaks into his school and tells him he's their leader.

The plot gets up to speed pretty quickly during the first few stages. The Gundam 00 pilots get their upgrades, Heero gets his unit back and Lelouch re-founds the Black Knights after C.C. restores his lost memories. Kamille, Shinn, Fa and Lunamaria defect from OZ (Who they were working for during the time skip), but Char (as Quattro) doesn't go with them, and he appears as an enemy pilot on a couple of stages. The end of Scenario 14 unifies the first route split, and brings almost all of the old team together, although those involved in the events of the last prologue stage (The Gurren Lagann pilots and the Getter Team) are still MIA, as is Crowe.

The most curious addition to the team is Setsuko Ohara, one of the two lead characters from the first Z game, and owner of one of the twelve spheres ('The Sorrowful Maiden', representing Virgo) that is helping drive the plot forward.

I know that Z2.2 has a total of sixty stages to work through, compared to 50 in Z2, so this is gonna take a little while to chew through. More updates as they come.
[SIGPIC][/SIGPIC]
befriend (v.): to use mecha-class beam weaponry to inflict grievous bodily harm on a target in the process of proving the validity of your belief system.